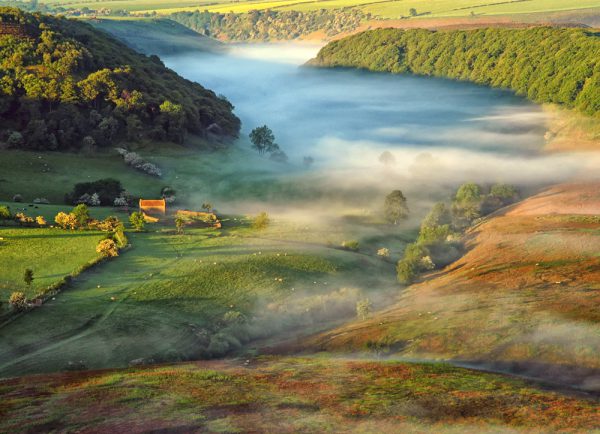 The Hole of Horcum is a section of valley, the Levisham Beck, upstream of Levisham and Lockton, in the Tabular Hills of the North York Moors National Park in Northern England. The hollow is four hundred feet deep and about three quarters of a mile across…..

When I was very young, as we drove the road from Pickering to Whitby, I was told that a giant had scooped up a handful of earth and thrown it into the sea. I then discovered the local legend tells how Wade the Giant scooped up a handful of earth to throw at his wife during an argument. Someone very kindly softened the story somewhat. My children have since created a world for themselves and believe (or rather “believed”) that the Mr Men live right in the basin of the hole, in the farmhouse that one day I will walk to. It is an understated yet wonderful piece of nature that allows the mind to wander freely. As my children visualise Mr Happy, my mind is turned to an idyllic location for refuges, shelters, cabins, protection and safety from the wild moor as individuals enter a moorland plateau, intersected by deep dales, valleys, land and woodland that if followed will lead them to the coast.

The Pyrenees as with many other mountain ranges, have a network of high and often very remote mountain refuges which are used for over-night accommodation for trekkers. Simple facilities, communal dorms, sleeping platforms, basic washing facilities but always near to beautiful lakes with running water nearby to dip into. Often no road access to them, no cars, just feet, bodies and ruck sacks. Weary travellers settling into these welcoming little shelter (is that Hygge?) as simple and raw as we can imagine.

Maybe one day there will be a network of little F&L cabins that start on the Moor and end at the Sea. Designed for adventures, protection, shelter, safety with the simple value being that often if we lift our heads and look, there is “more to see.”

Thank you to Michael Shaw – www.flowergategallery.co.uk for the wonderful photograph